“I remember that first day vividly. I recall, in particular, the students bowing as they entered or exited the gym. The rows of students standing in a straight line at attention with their fists held out in front of them was an imposing site. When the teacher shouted Japanese words, the class knelt and closed their eyes. After they stood once again they began executing karate techniques with loud shouts performed in unison. I could feel the noise in my chest. When I left that night, the thing that impressed me the most was not the punches or kicks. What caught my attention and piqued my interest was the palpable atmosphere of respect. That impressed me. It was something I had not expected.”

The year was 1984, and Sensei Bob had found something he truly loved. He threw himself into training and soaked up as much as he could. Whenever possible, he was training. Once he enjoyed the freedom that a driver’s license afforded, he spent six days per week with his sensei at the YMCA in Fairfield, Connecticut. Training was hard and his teacher (then fifth-degree black belt) Sensei Ray Martens was intense. 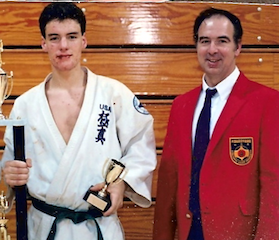 “Back then you didn’t ask too many questions… you just followed and trained as hard as you could. If Sensei had told us to go stop traffic, we’d have run out into the middle of the road in our uniforms and stood at attention. It was militaristic, but I absolutely loved it. It was perfect for me at the time. We trained hard and fought hard and I always tried my best. One thing is for sure, we learned to never give up, to fight the good fight, to never lose to yourself. That was more important than any technique.”

Sensei Bob attended the University of Connecticut from 1988 to 1993. He concentrated on his studies and trained diligently during school breaks. After he earned his degree in Computer Science and Engineering, Bob returned to training and was subsequently awarded his shodan (first-degree black belt) from Martens Sensei.

After a hiatus during which Sensei Bob started a new business and had his first child with his wife, Alison, he began formally training again with his sempai (senior). In 1998, Shihan Ray’s most senior student, Glenn Learnard, started teaching Kyokushin karate as a member dojo (school) of the International Federation of Karate and Bob began training with him. Sensei Glenn augmented the normal Kyokushin syllabus and introduced concepts such as kyoshu Jutsu (vital point striking), kansetsu waza (joint locks/manipulation), and bunkai (analysis) of traditional karate techniques. 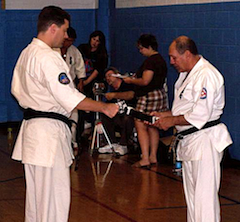 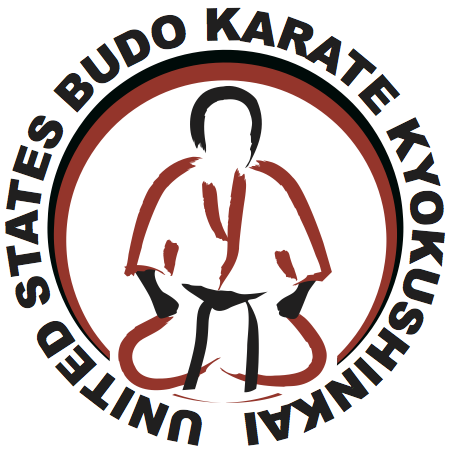 In July of 2009, the new dojo was opened and, for the first time, classes were offered six days a week. Sensei went from teaching and training 6-8 hours a week to teaching and training nearly 20 hours per week. He has continued that schedule for the past couple years. In 2011, after over 25 years of martial arts training, teaching, and learning, Sensei Bob received his yondan (fourth-degree black belt) from Shihan Raymond Martens.

Bob continues his own training as well as that of his students. His passion for karate has only intensified since becoming a sensei. He continues to expand his own knowledge of the martial arts as he delves deeper into the areas of full-contact fighting, self-defense, and improvement of the self through the practice of budo, the martial way.

Sensei has four children who you will find helping and training at the Connecticut Budo Karate dojo (opened in 2009) with he and his wife. Bob is also a co-founder of Closerware, a provider of software-based services for not-for-profit organizations. The dojo is operated as a labor of love in addition to Sensei’s very busy family life and full-time job. 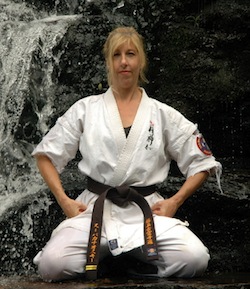 “Martial Arts offers extraordinary fitness and health benefits but it is so much more than this or even fighting. It is about developing oneself on every level to your maximum potential. The more developed you become the more you will have to give back to others. Indeed, the word “karate” means “empty hand” literally as in an unarmed method of combat as in punching or striking. More philosophically it means that the empty hand is for giving. It is one’s responsibility and obligation to pass down what they have learned.”

Sempai Sue taught a program designed to introduce young students to traditional karate training, at the Fairfield dojo, for 8 years. The program aims to help young students develop a positive, winning attitude and learn how to have the confidence in themselves to do the right things.

Sempai Sue has been training diligently at the Connecticut Budo Karate dojo since 2010 and continues to strive to improve and learn. She teaches various classes and age groups and usually mixes her personal training expertise into her lessons. She provides a good workout, for certain! Sempai Sue hopes to give back by inspiring others, especially other women and young people.

Sempai Sue is married with one child and resides in Trumbull, CT. She works for Cervalis, a premier provider of IT infrastructure solutions where she has served as director of human resources since 2000. She is also a personal trainer originally through National Academy of Sports Medicine.

He favorite quotes and reflections on karate appear below.

The ultimate aim of Karate lies not in victory or defeat but in the perfection of the character of its participants.Gichin Funakoshi

Character is about completing your obligations and responsibility with a peaceful heart in spite of how you feel. Challenges don’t build character, they reveal it. Character is the ability to always do what’s right. The reason we train in Karate is to always do the right action. The quality of your life will be determined by what you have the courage and character to do with it.Shihan Ray Martens 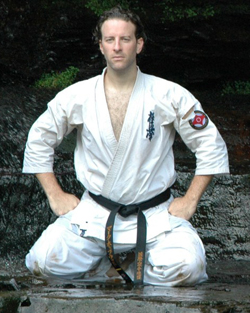 “Kyokushin Karate is about pushing your body and mind beyond what most could endure or imagine. Karate does not teach us to be normal. It teaches us to be exceptional. To expand what is possible while simultaneously teaching humility; Understanding that even decades of training is just a drop in the bucket of what we all have to learn as martial artists and as people. Even after all of these years I feel consumed and excited by everything I have yet to learn and honored to have the best brotherhood of teachers to guide and share in my growth.”

Sempai Mark Hopwood began training karate in 1986 as a 13 year old and trained through 1991 obtaining the rank of 5th kyu under Shihan Ray Martens before going off to college. He trained on and off for several years while completing his Bachelor’s degree from the University of Connecticut, getting married, and starting his first business venture.

Mark returned to train with Sensei Glenn Learnard, Shihan Ray’s most senior student, in 1998. He earned 3rd kyu and took another hiatus before returning to his martial arts training for good in 2003, competing in multiple semi and full knockdown tournaments.

Mark earned his shodan (first-degree black belt) from Sensei Glenn in December of 2006. Sempai Mark has been mentored his entire martial arts career and life by his brother, Sensei Bob Hopwood, who assumed responsibility for the dojo in 2009. Mark is honored to have his brother as his Sensei.

“As a young student it was a great inspiration to witness black belt gradings. I had such admiration for my sempais. It also was an important lesson in what it took to become and remain a black belt. I never took the privilege of earning a black belt for granted. I always understood that even though there was a lot of blood, sweat, and tears to be invested on my part that it was a precious gift that carried with it a great, lifelong responsibility.”

Mark grew up in Trumbull and moved back in 2003 with his wife (also a Trumbull native) to raise a family. He has three young children, two of whom train regularly in our little dragons and kyokushin programs. Sempai Mark also works for Closerware, a successful web-based software business he co-founded in 2003. 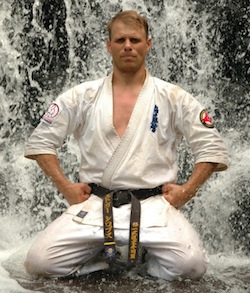 “I knew karate would be the thing to bring me back.”

Born in Latvia, Edgar Silovs first began his martial arts journey at the age of 15 by studying from a book. The book, given to him by his father, was in the Russian language and titled, Boy’s Karate. Eager for more, in 1992 he responded to an advertisement in a local newspaper for a karate school. Classes were offered in two neighboring towns on alternate days. Edgar started training and went as often as he could, traveling to both towns and training six days a week.

In his first class, the sempai introduced the karate style – Kyokushin, and offered a brief history including stories of Sosai Oyama. It was then that Edgar realized that this was indeed the very same karate in his father’s book. Though “Kyokushin” was not mentioned, the author of the book was Mas Oyama; and as Edgar explains, “sometimes life just puts things together for you.”

Edgar immigrated to the United States in 1998. In late 2003, Edgar had a terrible accident that, coincidentally, helped to bring him back to karate. Working for a tree service, Edgar fell from a great height and was lucky to survive. After surgery, during which he had metal pins placed in his hip, pelvis, and ankle, his doctor told him that he could no longer practice karate or play ice hockey. It was then that he renewed his search for a school, feeling “karate would be the thing to bring [him] back.”

He searched the Internet found our site and started training in June of 2004. Edgar has represented our dojo in two full-contact tournaments: winning one and placing in another. In January 2010, Edgar successful passed his shodan test in front of Shihan Ray Martens. With his daughter also training with us, karate is a family affair! 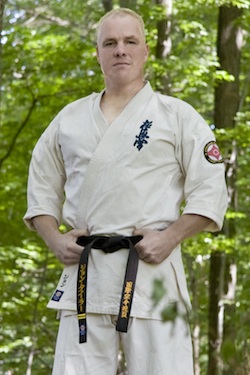 “One of my favorite sayings is: ‘Bravery is not the absence of fear. It is the mastery over it.’ That is one of the greatest aspects of training.”

Sempai John grew up in Darien, Connecticut and after graduating from Darien High School served four years in the United States Marine Corps.

Sempai John works for the Fairfield Police Department where he has served as a police officer since 1989.