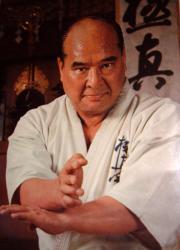 Kyokushin (Pronounced roughly: “Key-yoke / shin”) means “Ultimate truth or reality.” The Kyokushin style of karate was founded by the late Masutatsu Oyama. After having practiced other traditional styles of Karate he developed a method of fighting which became commonly known as “The Strongest Karate.” Kyokushin was cited by the Guinness book of World Records as one of the five major schools of Karate in Japan, and at one time Kyokushin was cited as the largest organization under one master. In the December 1999 issue of Inside Kung Fu Magazine Mas Oyama was named as “One of the greatest Karate Masters of all time.”

The symbol shown to the left is worn on the front of the gi (uniform) on the left of the wearer’s chest. The symbol is Japanese calligraphy artwork for “kyokushinkai,” which is the name given by Sosai Mas Oyama to the karate style he created.

The artwork was originally painted by Sensei Haramotoki, calligraphy master and friend of Sosai Mas Oyama. It means “Society of the ultimate truth” and is comprised of the three Kanji characters shown here to the right: “kyoku,” “shin,” and “kai”.

The meanings of each are as follows.

The “logo” of Kyokushinkai is the Kanku shown to the left. The Kanku is derived from the Kanku Kata, sky gazing form. In this Kata the hands are raised to scan the sky and the symbol is formed. The points of the Kanku represent the fingers and imply the ultimate or peaks. The thick sections, represent the wrists and imply power. The center represents infinity, implying depth. The whole Kanku is based and enclosed by a circle, representing continuity and circular action.