Sosai (President) Masutatsu Oyama, the founder of Kyokushin Karate, was born in southern Korea in 1923. While living at his sister’s farm in Manchuria at the age of nine, he began his lifelong journey along the Martial Way when he began studying the southern Chinese form of kempo know as “Eighteen Hands”. When Mas Oyama returned to Korea at the age of 12, he continued his training in Korean kempo.

In 1938, at the age of 15, Mas Oyama moved to Japan to train as an aviator, and continued his martial arts training by participating in judo and boxing. Shortly afterwards, he began training at the dojo of Gichin Funakoshi, who had brought karate from Okinawa to Japan and developed what is now known as Shotokan Karate. Mas Oyama’s training progressed so rapidly that by the age of 17, he was a Nidan (2nd Dan), and by the age of 20, he was a Yondan (4th Dan) in Shotokan. At this point, Mas Oyama took a serious interest in Judo, and in less than four years he achieved the rank of Yondan in Judo as well.

After the end of World War II, Mas Oyama began training under So Nei Chu, one of the highest authorities in Japan of Goju Ryu, an Okinawan karate style. So Nei Chu, renowned for the power of his body as well as his spiritual insight, encouraged Mas Oyama to dedicate his life to the Martial Way. He suggested that Mas Oyama retreat from civilization for three years to train his mind and body without the distractions of the outside world.

Around this time, Mas Oyama also met Eiji Yoshikawa, the author of the novel Musashi, which was based on the life and exploits of Miyamoto Musashi, Japan’s most famous Samurai warrior. Both the novel and the author helped to teach him the meaning of Bushido, the Way of the Warrior. That same year, Mas Oyama went to Mt. Minobu in Chiba Prefecture, where Musashi had developed his style of sword fighting. Mas Oyama thought that this would be an appropriate place to begin the rigorous training he had planned for himself. Accompanied by a student, he went into the wilderness there to train, with a friend bringing food supplies to them once a month. After six months of training, his student was unable to handle the solitude and secretly fled during the night, leaving Mas Oyama completely alone to continue his training. After fourteen months of training in the wilderness, his friend informed Mas Oyama that he could no longer provide the monthly supplies of food, and Mas Oyama had to return to civilization.

A few months later, in 1947, Mas Oyama won the karate section of the first Japanese National Martial Arts Championships after World War II. However, still feeling empty for not having completed the three years of solitude, he decided to dedicate his life completely to karate. Once again Mas Oyama left civilization for the wilderness, this time going to Mt. Kiyozumi, also in Chiba Prefecture, which he chose for its spiritually uplifting environment. This time his training was fanatical – 12 hours a day, every day, with no rest days, standing under cold buffeting waterfalls, breaking river stones with his hands, using trees as makiwara (striking boards), jumping over rapidly growing flax plants hundreds of times each day. Each day also included a period of study of the ancients classics on the martial arts, Zen, and philosophy. After eighteen months of rigorous training, Mas Oyama returned to civilization fully confident in himself and able to take control of his life.

In the 1950s, Mas Oyama began demonstrating his power and skill by fighting bulls. In all, he fought 52 bulls, three of which he killed instantly and 49 of whose horns he took off with shuto (knife hand) strikes. In 1952, Mas Oyama traveled throughout the United States for a year, demonstrating his karate live and on national television. During subsequent years, he took on all challengers, resulting in fights with 270 different people. He defeated the vast majority of his opponents with just one technique. A fight never lasted more than three minutes, and rarely lasted more than a few seconds. Mas Oyama’s fighting technique was based on the Samurai warriors’ principle of “Ichi geki hissatsu”, or “One strike, certain death”. If he got through to you, the fight was over. If he hit you, you broke – if you blocked his punch, your arm was broken or dislocated, if you didn’t block it, your rib was broken. Because of his strength and skill, he became known as “the Godhand”. 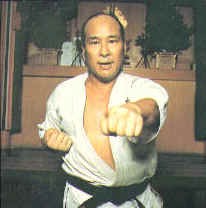 In 1953, Mas Oyama opened his first “dojo” on a grass lot in Tokyo. In 1955, he opened his first real dojo in a former ballet studio behind Rikkyo University. In 1957, the name “Kyokushin”, or “Ultimate Truth”, was adopted for Mas Oyama’s karate organization, which had 700 members by then, despite the high drop-out rate due to the severity of training. Practitioners of other styles also came to train here for the jis-sen kumite (full contact fighting). Mas Oyama would observe those from other styles and adopt any techniques that would be useful in a fight. By doing so, Kyokushin Karate evolved into one of the most formidable style of martial arts in the world. It soon became known as “The Strongest Karate”, not only because of the incredible feats of strength and endurance that Mas Oyama performed, but also because of the rigorous requirements of the training and tournaments.

In order to test his own abilities, Mas Oyama decided to perform a three hundred man kumite (fight) in three days. He chose the strongest students in his dojo to fight him one at a time. After each had a turn, they started from the beginning again until all three hundred fights were completed. Each student had to face Mas Oyama about four times over the three days, though some never made it past the first day due to Oyama’s powerful blows. He defeated all of his opponents, never wavering in his resolve, despite the fact that he was injured in the process. Legend has it that Mas Oyama was willing to go for a fourth day, but no opponents were willing or able to do so.

Since its inception, Kyokushin Karate has spread to more than 120 countries, with more than twelve million practitioners, making it one of the largest martial arts styles in the world.

Mas Oyama’s unexpected death left his organization, the International Karate Organization (IKO), in a very confused state. Prior to his death, he stated in his will that Yukio Nishida would be his successor to lead the IKO, but on his deathbed he apparently named Akiyoshi Matsui, then Godan (5th Dan). This has resulted in a splintering of the IKO into a number of groups, each of which claims to be the true successor to Mas Oyama’s organization.

[The information on this page was obtained in large part from the extensive Australian Kyokushin website created and maintained by Sensei Shaharin Yussof. ]